Well, it’s the end of another year – one which has been pretty crazy in many respects, with various political issues happening alongside seemingly the most celebrity deaths in recent memory. Luckily, to offset all that craziness, there were many great things to 2016, and one thing which I’ll always treasure – becoming a Dad for the first time. With my son arriving in April, the label has had to take a bit of a back seat whilst I got used to having to look after the little one, and money spent on putting out records and putting on shows instead went to buying all sorts of baby accessories, toys, nappies, milk and feeding an extra mouth in the house! That said, we were able to continue to work with some great bands this year – with four main releases, a couple of great shows and some more videos for the Disconnect Disconnect Sessions on our YouTube Channel.

We kicked off the year with the release of Thousand Oaks‘s – Monsters Begetting Monsters in January, which saw the guys from Italy skatepunk legends Jet Market back with a new band in fine form with an album of fourteen skatepunk / melodic hardcore hits. 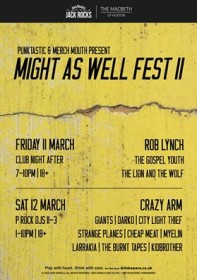 In March we were part of the team putting together Might As Well Fest II at The Macbeth in London, which featured thirteen great bands over 2 (drink filled) days – much fun was had by all, and I can genuinely say that I really enjoyed all the bands and the overall vibe, so thanks to everyone who came out and the great acts who played: Rob Lynch, The Gospel Youth, The Lion And The Wolf, Crazy Arm, Giants, Darko, City Light Thief, Strange Planes, Cheap Meat, Myelin, Larrakia, The Burnt Tapes and KidBrother. We’re currently exploring options for the next Might As Well Fest, so any ideas on bands please chuck them our way via the details on our Facebook page: https://www.facebook.com/mightaswellpromo/

Here’s one of my favourite photos from the day – I think this was taken pretty early in the day on the Saturday, but should give you an idea of the vibe of the weekend… 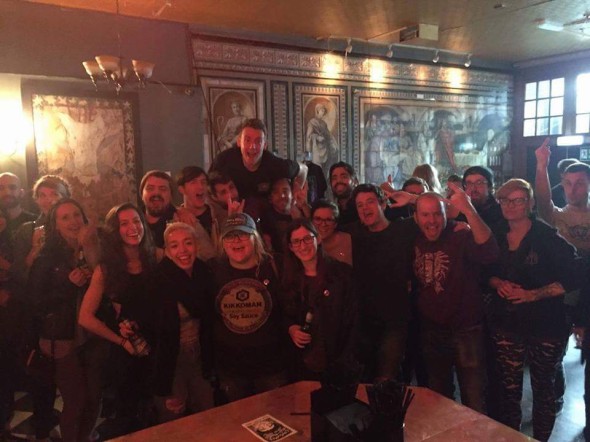 In April, the world was blessed with the birth of punk rock’s newest star, Finley Allen! He’s already picked up the guitar so expect good things! Late in the month we released our newest compilation Fast Around The World, featuring 32 of our favourite fast punk rock and pop punk bands from all over the globe. The compilation is available for a free/donation download at the links below, so make sure to check it out and discover some new favourites!


Fast forward a few months, and in July Larrakia followed up their brilliant debut 3 track EP from last year with new EP Rantallion which solidified their place as one of the UK’s very best melodic skatepunk bands

In August, our good friends from down under, The Decline, came over for another UK tour, and having been lucky to catch them at an awesome show with A Wilhelm Scream in Kingston, alongside Kick The Crutches we hosted the London leg of their tour at a very sweaty and packed out Veg Bar in Brixton. There was brilliant support on the night from UK legends The Human Project, Edgarville and Triple Sundae, so thanks to all who came down and made it a great night.

Our final release of the year came in October and was a great one, with one of the UK’s best upcoming pop punk bands, These Minds and their second EP Pour Out. The limited edition vinyl record (in frosted clear and transparent red) was released alongside US pop punk label Common Ground Records, and saw the band land a number of great support slots and a UK tour alongside Catch Fire. The band will be on the road again in February with Weatherstate and Six Time Champion, so be sure to check out those dates.


Along with the releases, we had time to add a few more videos to the Disconnect Disconnect Sessions over on our YouTube channel, so head over there to see the newer videos from Larkhill, Years and Miles and Not Half Bad, whose records we are also now distributing in the UK: http://disconnectdisconnectrecords.bigcartel.com/product/not-half-bad-records-and-cds

Our final project of the year was the UK/European distribution of the brilliant new Fat Wreck Chords documentary, A Fat Wreck. If you haven’t checked this out yet, it comes highly recommended, and was highly anticipated, as we sold out of our initial allocation of DVDs. We’re expecting more sometime early 2017, so make sure to put your order in to avoid disappointment.

The end of the year has been busy planning for 2017 – with new releases in progress for a bunch of cool bands from throughout Europe Forever Unclean, For I Am and Fast Food Society, with plenty more in the works, so keep an eye on our various sites for more news on those.

As always, thank you very much to all of you who support what we do here at Disconnect Disconnect Records, and if you think you know anyone who might enjoy what we do, please share our links to ensure we can keep bringing you great punk rock records into the future!

Many thanks, and happy new year!